TAPIZ
Sephardic Songs: From Andalusia to the Balkans

Susana Behar brings us her most recent album, TAPIZ, in which her very own sound is revealed, a sound she’s developed in recent years, together with Flamenco composer and guitarist, Jose Luis de la Paz and the Iranian setarist, singer and percussionist, Reza Filsoofi. Both will accompany her at this concert.

Sang in Ladino, the language of the Sephardic jews, TAPIZ takes the listener in a musical journey through the Sephardic world, from Andalusia to the Balkans, establishing bridges between Andalusian and flamenco music, and the exotic rhythms of that region. Behar will also be accompanied by violinist Federico Britos and percussionist Adolfo Herrera, who as guest musicians, participated in this project. 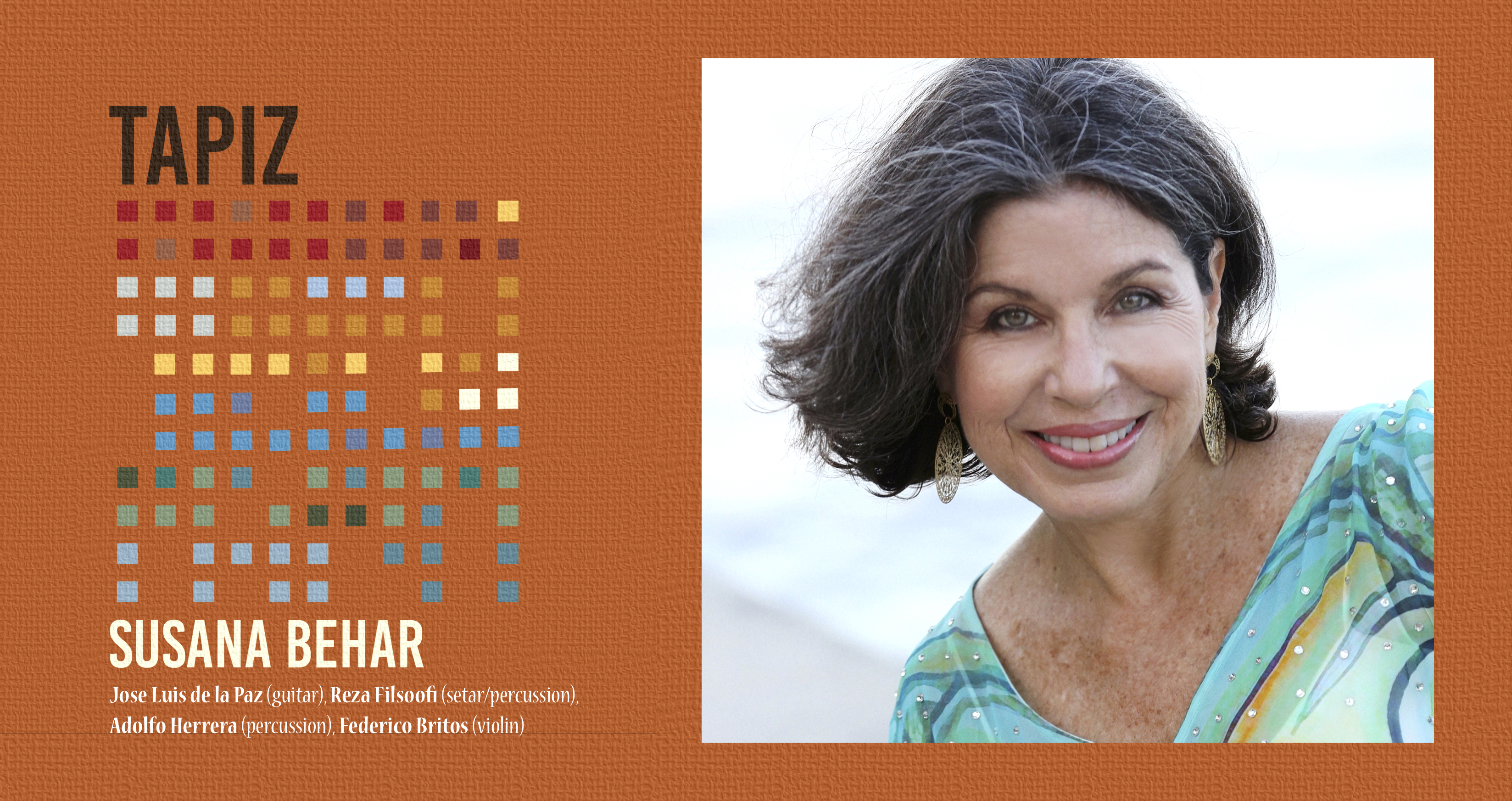 ‘This tapestry, my TAPIZ, has been inspired by the Sephardic music of my ancestors and has been spun with threads of many colors, richness and diversity. Ancient threads that came from medieval Spain… Vibrant threads from Turkey, Bulgaria, Greece, Yugoslavia and Bosnia… Strong threads from Cuba, Spain and Iran…

Sephardic music has been in my blood from ancient times and as such, it has been part of the soundtrack of my life. It came with my Turkish grandparents to Cuba where I was born, and it was there, in their home, where I first heard it.

This TAPIZ is a tapestry of sounds, poetry and rhythms, but also a tapestry of love and longing, exile and loss, dreams and triumphs, history and legend. The threads of this colorful TAPIZ intertwine through the lyrics, the melodies, the rhythms of the songs, and come to life through the exceptional playing of all the musicians involved.

When I met Flamenco guitarist and composer Jose Luis de la Paz, I knew I had found a musical soul mate and right away our collaboration started, exploring the common roots of traditional Andalusian music and Sephardic songs, and their influence on the development of Flamenco. Later on, I met Iranian singer, percussionist and setar player Reza Filsoofi and the middle eastern sounds that complemented this project. And so, the weaving of this TAPIZ, finally started…

With this recording, while infusing it with our own modern aesthetics, we wish to contribute to the preservation and perpetuation of Sephardic music, a musical tradition that is an integral part of the very rich world music genre. In doing so, I would like to take the listeners on a musical journey, full of colors, images and textures; a tapestry of sorts, a colorful and soulful TAPIZ’.

Susana Behar
Susana Behar, Cuban-American singer of Sephardic origin, received the ‘2015 Individual Artist Fellowship Award in Folk Arts’ awarded by the Cultural Division of the State Department of Florida, in recognition of her work in the dissemination and preservation of Sephardic music. Her interpretative style is influenced by her Cuban and Sephardic roots, the Latin American song and Flamenco. She has participated in prestigious festivals such as Festival Sefarad (Montreal, CA), Piccolo Spoleto (Charleston, SC), Sacred Sounds (Atlanta, GA), Winter Jewish Music Concert (Miami, Fl) and the Florida Folklife Festival (White Springs, Fl), among others, also taking her concerts through the United States, Peru, Mexico, Canada and Japan.

Currently, in addition to her project TAPIZ, Susana presents her concert ‘When Ladino rhymes with Latino’ where the Sephardic songs are intertwined with the Latin American ones, as are the origins and experiences of this singer.

Also, Susana is part of the concert ‘Toda Ciencia Trascendiendo’, for which the composer Jose Luis de la Paz has set to music, a series of Spanish mystical poems, especially for her voice and interpretation.

Jose Luis de la Paz
Composer, virtuoso and performer, Jose Luis de la Paz is recognized in all the disciplines of the Flamenco Art; his compositions range from the traditional up to the most experimental forms in flamenco music.

He appeared in Felix Grande’s book “Agenda Flamenca” (1995) as one of the best flamenco guitarists.

From 2015-16 he participated in Amor Brujo by the LA Phil and G. Dudamel with artistic direction by Siudy Garrido, Concierto de Aranjuez (Rodrigo Master Piece) and was nominated for the US Artist Fellowship.

Jose Luis has collaborated as guitarist and composer on the albums “Tapiz” by Susana Behar (singer) and “Eastwind of the Evening Star” by Colin Farish (pianist-composer).

In recent years, he has created a new classic work entitled ‘Suite for Flamenco Guitar and Orchestra’, ‘Toda Ciencia Trascendiendo’ (About Mystic Poetry), Ensemble (New World-Flamenco Trio) and is composing the soundtrack of the film Finding Compas, by Kathy Douglas.

Reza Filsoofi
Born in Tehran, Iran, Reza Filsoofi is an instrumentalist, singer, and composer specializing in Iranian music. Reza refined his musical talents under distinguished teachers and mastered multiple instruments, including santoor and setar (stringed instruments) and daf and tonbak (percussion instruments). Now a South Florida resident, he shares his music as a teacher, recording artist, and performer, collaborating extensively with various groups and musicians in Iran and across the United States. Reza directs Caravan Ensemble, the first Iranian traditional music ensemble in South Florida.