Barrios premiered “Reditum, dancing flamenco” in 2017 at the prestigious Festival of Jerez and it was described by the critics as elegant and effortless while demonstrating a versatility and passion that demands attention from the audience.

The passionate strength of Madrid’s famed Casa Patas returns to Miami with a choreography that relishes in the small yet grand memories that spark a smile and pinch the soul. 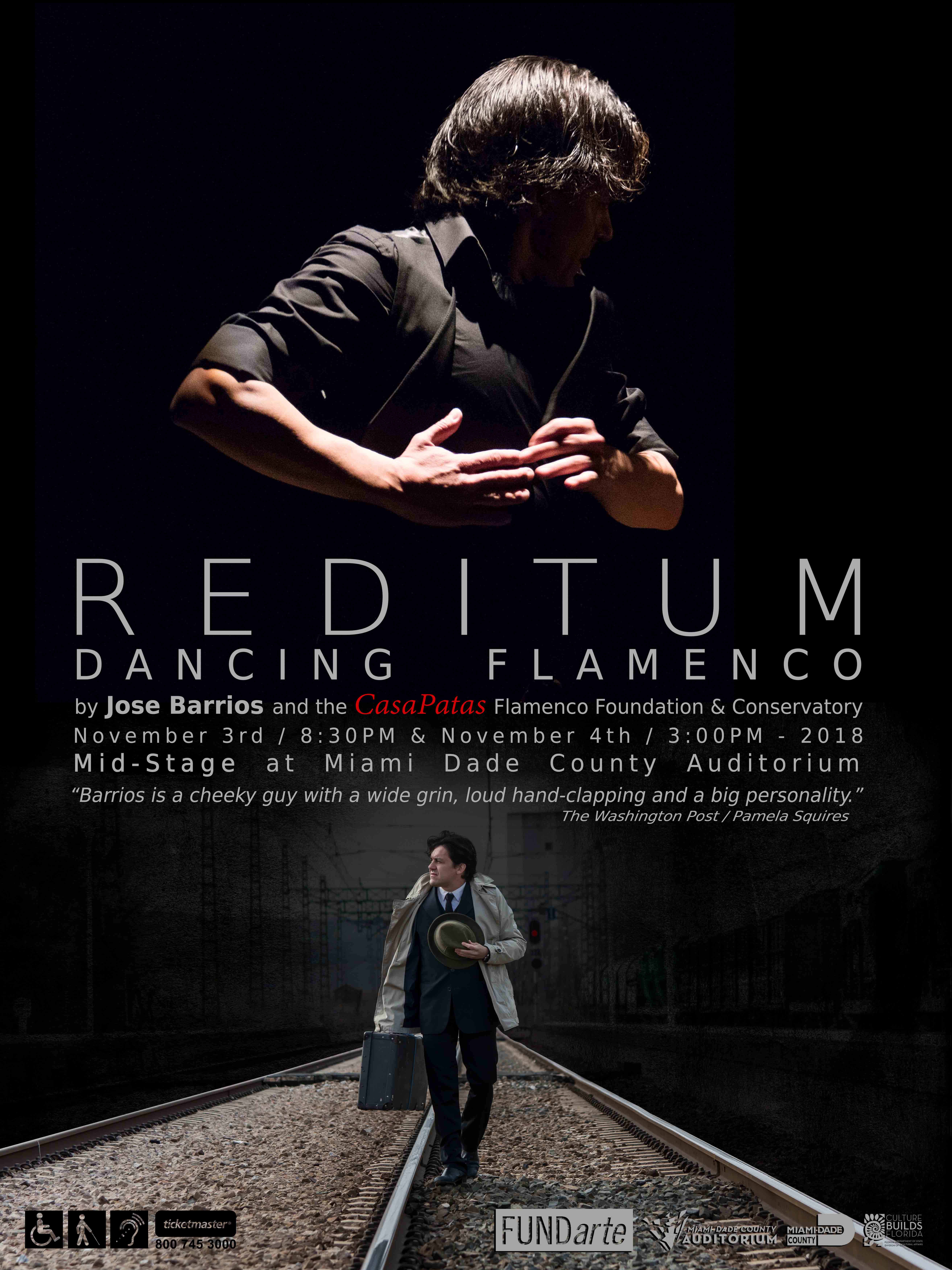 José Barrios, Director & Choreographer
After studying with various flamenco professors in his native Cordoba, Jose Barrios began to work in festivals in Andalucia sharing the stage with top name artists. He continued his studies in Seville and Madrid with professors such as Manolo Marin, Domingo Ortega, La China, while developing projects as choreographer and dancer in different tours through the United States with the Boston Flamenco Ballet. Following this, he traveled to Japan to teach classes in academies in Osaka and Kyoto and dance alongside Belen Maya at the Jal Kyoto Festival. He settled in Madrid, where he worked with various tablao. Under the auspices of Casa Patas, he presents “Básicamente Flamenco” at the Gala Theatre in Washington, D.C. (2007), at the Opera House in Cairo, Egypt (2009), and in Morocco at the Assilah Cultural Festival (2009). In 2010 and 2014 he is the invited guest artist at the “Festival de Cante Flamenco (Festival of Flamenco Song) in Miami. He is also invited to choreograph and give classes at the Ensemble Español Chicago and dances as a soloist at their annual festivals.

In 2010, he participates in the closing ceremonies of Spain ́s Presidency of the European Union by creating and performing in “Por si acaso amanece” (“For if by Chance it Dawns”) in Agadir, Morocco. This performance, sponsored by Casa Patas, toured the U.S. in 2011, along with his newly crafted project “Flamenco Algarabía”. In 2012, he premieres “Vino amargo” (“Bitter Wine”) at the Fringe Festival in Madrid. In 2014, in collaboration with Casa Patas and the Cervantes Institute, he represents Spain at the VI Festival de Danza Contemporánea de Argel (Algeria), creating and performing in “A solas con él” (“Alone with Him”). In 2017, he creates, premieres and stars in the work “Reditum” at the prestigious Festival de Jerez.

The Casa Patas Flamenco Foundation and Conservatory was born in the year 2000 with the goal of becoming a national clearinghouse for all activities related to the teaching, research and promotion of flamenco song, music and dance. Hence it is the mission of Casa Patas to actively promote this Art Form that was recognized by UNESCO in 2010 as an Intangible Cultural Heritage of Humanity. To that end, every week, the Casa Patas tablao (flamenco stage) presents a broad range of artists who represent different dance, song and musical styles. In total, there are 300 performances annually. The artists who appear at Casa Patas can also be seen at theaters, festivals and cultural centers throughout the globe.

FLAMENCOS’ upcoming events | FUNDarte in 2019: Farruquito // February 2nd, 2019 co-presented with South Miami Dade Cultural and Arts Center.
Heir to a famed gypsy flamenco dynasty, Farruquito first lit up the stage at age four, alongside his legendary grandfather El Farruco. Since then, he has been consistently acclaimed as one of flamenco’s greatest performers, a dance artist of breathtaking power, virtuosity, and passion whom the New York Times dubbed “an eagle in flight.”

Experience the explosive movement and sound of contemporary flamenco that is currently redefining the genre in this extended performance featuring the most challenging and innovative experiments in freshly updated flamenco expression from the Iberian Peninsula.