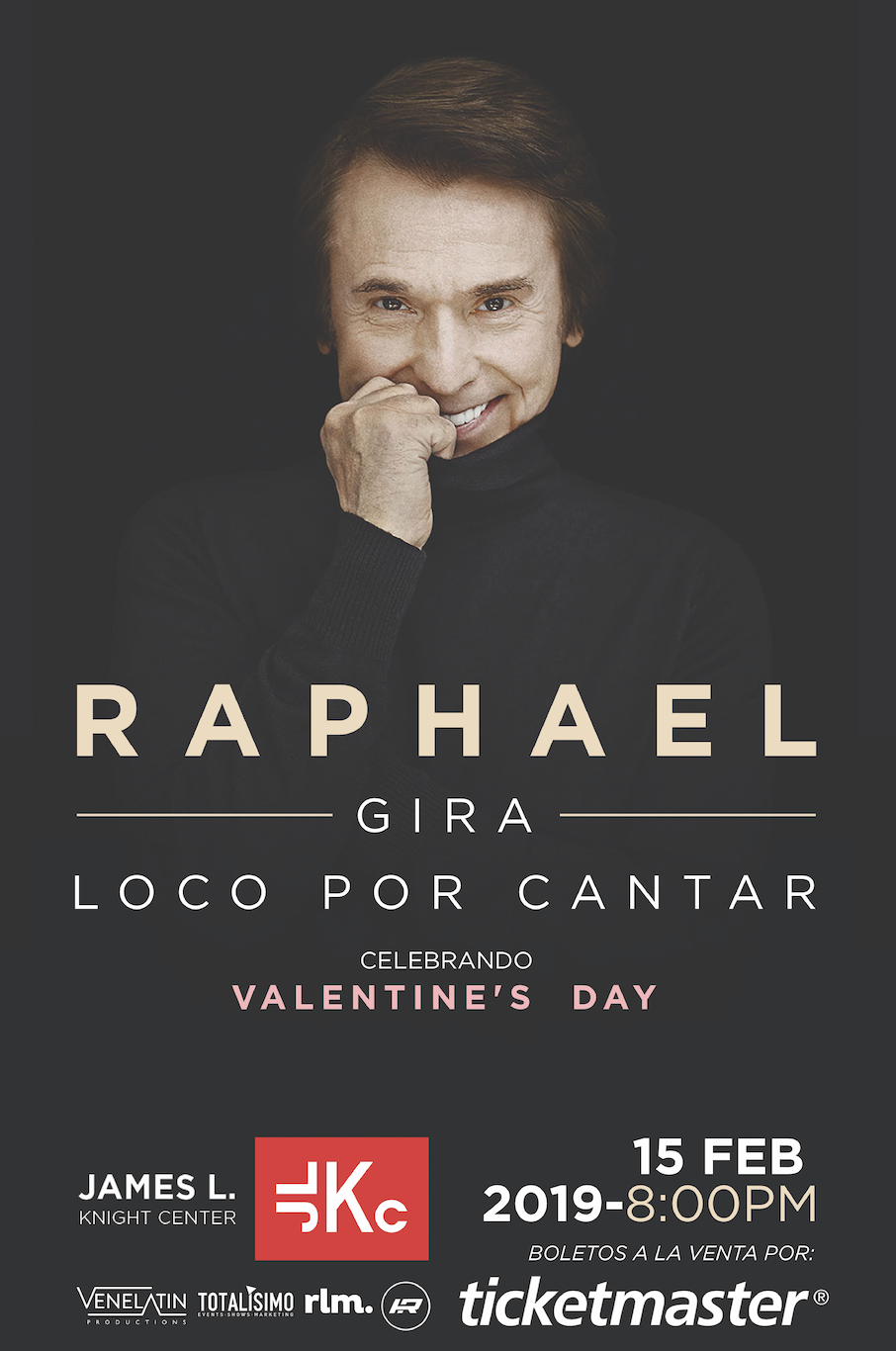 Miguel Rafael Martos Sánchez (born May 5, 1943 in Linares, Spain), often simply referred to as Raphael, is a worldwide acclaimed Spanish singer and television, film and theater actor. A pioneer of modern Spanish music, he is considered a major influence in having opened the door and paving the way to the flood of Spanish singers that followed on the wake of his enormous success. His wide-range voice, added to his quality as showman, has entertained and engaged people worldwide for more than five decades.

Raphael began his professional career by signing with the Dutch record label Philips. To distinguish himself, he adopted the “ph” of the company’s name and christened himself ‘Raphael’. His first singles were “Te voy a contar mi vida” and “A pesar de todo”, among others. Raphael adopted his own peculiar singing style from the beginning; he is known for acting each one of his songs while on stage, emphasizing his gestures with high dramatic effect. It is not unusual for Raphael to ad lib lyrics as to localize a song depending on the venue he’s singing at, wear Latin American peasant costumes and dance folk dances within a song, kicking and demolishing a mirror, or doing the moves of a flamenco dancer or a bullfighter onstage. He also possesses a wide vocal range, which he often used in the beginning of his career as to evoke a choirboy approach to some songs.

When he was nineteen, he won first, second and third awards at the famous Benidorm International Song Festival, Spain, 1962, with the songs: “Llevan”, “Inmensidad” and “Tu Conciencia”. After a brief relation with Barclay record label, who produced just an EP, he signed a contract with Hispavox recording company, and began a long artistic relationship with the musical director of this label, the late, talented argentinian orchestrator Waldo de los Ríos and intensify the partnership with outstanding Spanish songwriter Manuel Alejandro.

In 1966 and 1967 he represented Spain at the XII and XIII Eurovision Song Contest in Luxembourg, singing “Yo soy aquél” and Vienna, “Hablemos del amor” and placing both 7th and 6th position, although he did not win. It was the first time that Spain obtained a high place in the competition, leaving the door open for victory the following year, which Spain achieved with “La, la, la”, another song of modern style too, which for political reasons still in Spain then was sung instead by Massiel. This served as a turning point in Raphael’s career, making him an international star. He traveled and performed worldwide in Europe, Latin America, Puerto Rico, the United States, Russia and Japan. Songs such as “Yo soy aquel” (his signature song), “Cuando tú no estás”, “Mi gran noche”, “Digan lo que digan”, “Tema de amor”, “Estuve enamorado” and “Desde aquel día” cemented his status as a major international singing star.