This month, the series named LITERARY WEDNESDAYS, with the support of the North American Academy of the Spanish Language (ANLE), Baquiana Literary Magazine and the Spanish Cultural Center of Miami (CCEMIAMI), had as special guest the Argentinean writer and journalist Jorge Ignacio Covarrubias, to present his book EL MENSAJE DE UN MILLÓN DE AÑOS [THE MESSAGE OF A MILLION YEARS] (New York: ANLE, 2020).

This book of short stories, micro-stories, hyper-brief and autological, encompasses the fantasy and science fiction genres with allusions to history, philosophy, religion and science. The sense of the fantastic, the absurd, the paradox, and the humor abound in the stories, revealing influences from Kafka, Borges, Calvino, and Bradbury. The volume is rightly illustrated with photographs of Gerardo Piña Rosales.

Information about the special guest: 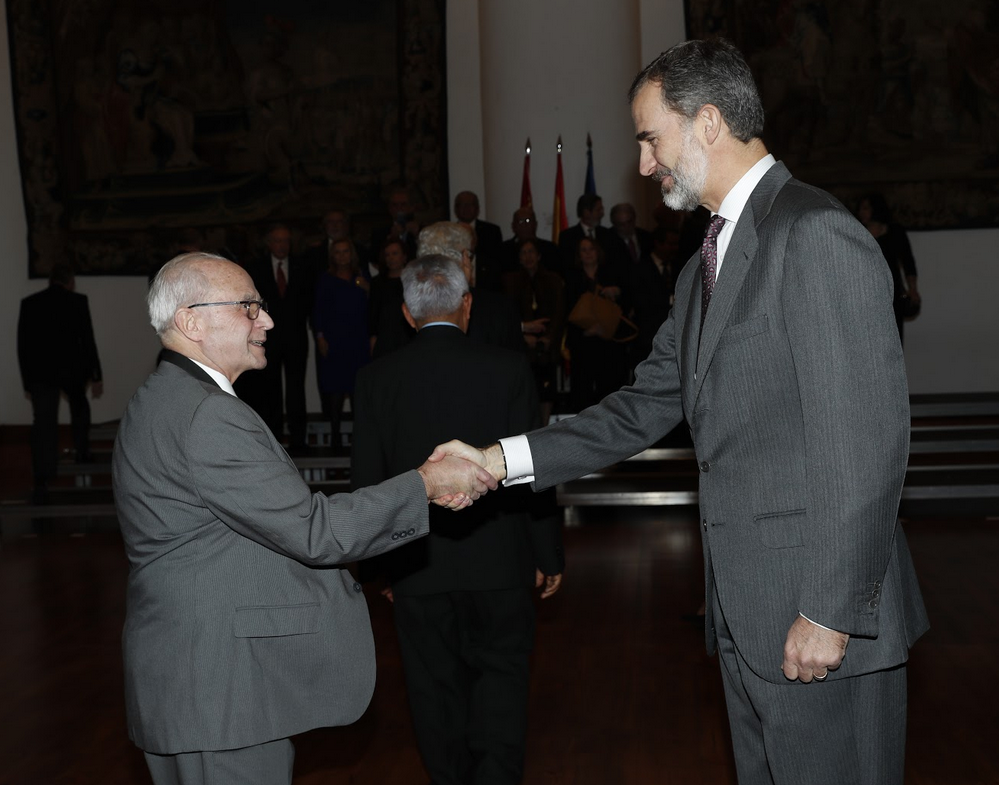 He was born in Argentina and he has resided in the United States for several decades. He is Assistant Director of the North American Academy of the Spanish Language, Corresponding Member of the Spanish Royal Academy, and Licentiate in Hispanic Letters by the State University of New York in Stony Brook. He is the author of four books, two audio-books, and the co-editor of several more. He has won prizes of essays, short stories, poetry and journalism. He has translated articles for The New York Times, Reader’s Digest, CBS, Money, International Psychiatry Today, Kraft, Lamazeand other media outlets. He was editor in chief of the magazine Canales and editor of the magazine La Familia de Hoy. He has lectured in Columbia University, New York University, St. John’s University, Cervantes Institute, Hunter College, The Observatory of the Spanish and the Hispanic Cultures at Harvard University, and The New York City Library. He has given courses, workshops, and conferences of literary theory, linguistic, journalism, and translation in Argentina, Colombia, Venezuela, Panama, El Salvador, Mexico, Nicaragua, Honduras, Puerto Rico, Spain, the Czech Republic, and the USA. He has participated in the making of the Dictionary of the Spanish Language, the Dictionary of Americanismsand the Basic Grammar.

He actually represents the United States of America and the Philippines as director of an inter-academic commission that prepares a Glossary of grammatical terms and he integrates another commission that collaborates in the next edition of the Dictionary. He was a contributor of the Encyclopedia of Spanish in the World and the Encyclopedia of the Spanish in the USA. He also won the silver medal as Men of Letters of the Société Arts-Sciences-Lettres of Paris. He was editor during 44 years of the Latin American Department of the news agency The Associated Press in New York where he covered 37 assignments to 28 countries, including general assemblies to the United Nations (UN) and the Organization of American States (OAS), language congresses, twelve papal visits, soccer world championships, Olympic games, Pan-American games, soccer club world cups, youth soccer world cups, Euro cups, and political, scientific, cultural,  religious, and sports activities. He was part of the team that won the prize Tom Wallace of the Inter-American Press Society about the children situation in Hispanic America. Individually, he won the second prize of the daily journal La Nación of Buenos Aires with a series of essays about the religious fundamentalism in the world. He is a restless traveler. To this date, July 2021, he has visited 70 countries from all the continents.

She was born in Santiago of Cuba and she has resided in the United States for several decades. She is a poet, narrator, playwright, essayist, editor, literary critic, translator, director of the Editorial Board of Baquiana Literary Magazine, Numerary Member of the North American Academy of the Spanish Language (ANLE), and Correspondent Member of the Spanish Royal Academy (RAE) and of the Venezuelan Academy of the Language (AVL). She has published more than twenty books in different literary genres. Her most recent books of poetry are: Rumores de Suburbios (2009) and Miami / poemas de la ciudad – poems of the city (2015). Of theater: Trilogía de Teatro Breve (2012) and Las Tocayas (2013). Of essays, notes and literary reviews: Crónicas Hispanounidenses (2014). Her work has been partially translated into several languages, as well as published in magazines and anthologies in Asia, Europe, Latin America, Middle East, and the USA. She has received some awards and acknowledgements in Chile and the United States. She participated in the writing of the first “Encyclopedia of the Spanish in the United States” (Yearbook of the Cervantes Institute) in Madrid, Spain (Santillana, 2008). The publishing house Holt, Rinehart & Winston included her poetry in the text books: Exprésate(2006- 2010) and Cultura y Lenguaje (2007-2010), used in the study of Spanish in middle and high schools throughout the United States. In the year 2010, she was selected among the most outstanding 100 Latinos of Miami for her work and contribution to the culture.