This month of October, the series named LITERARY WEDNESDAYS, with the support of the North American Academy of the Spanish Language (ANLE), Baquiana Literary Magazine and the Spanish Cultural Center of Miami (CCEMIAMI), has as special guests the professors Gerardo Piña Rosales and Daniel R. Fernández, to present the book CUANDO LLEGAMOS. EXPERIENCIAS MIGRATORIAS [WHEN WE ARRIVED. MIGRANT EXPERIENCES] (New York: ANLE, 2020).

Gerardo Piña Rosales and Daniel R. Fernández are part of the Board of Directors of the North American Academy of the Spanish Language (ANLE). 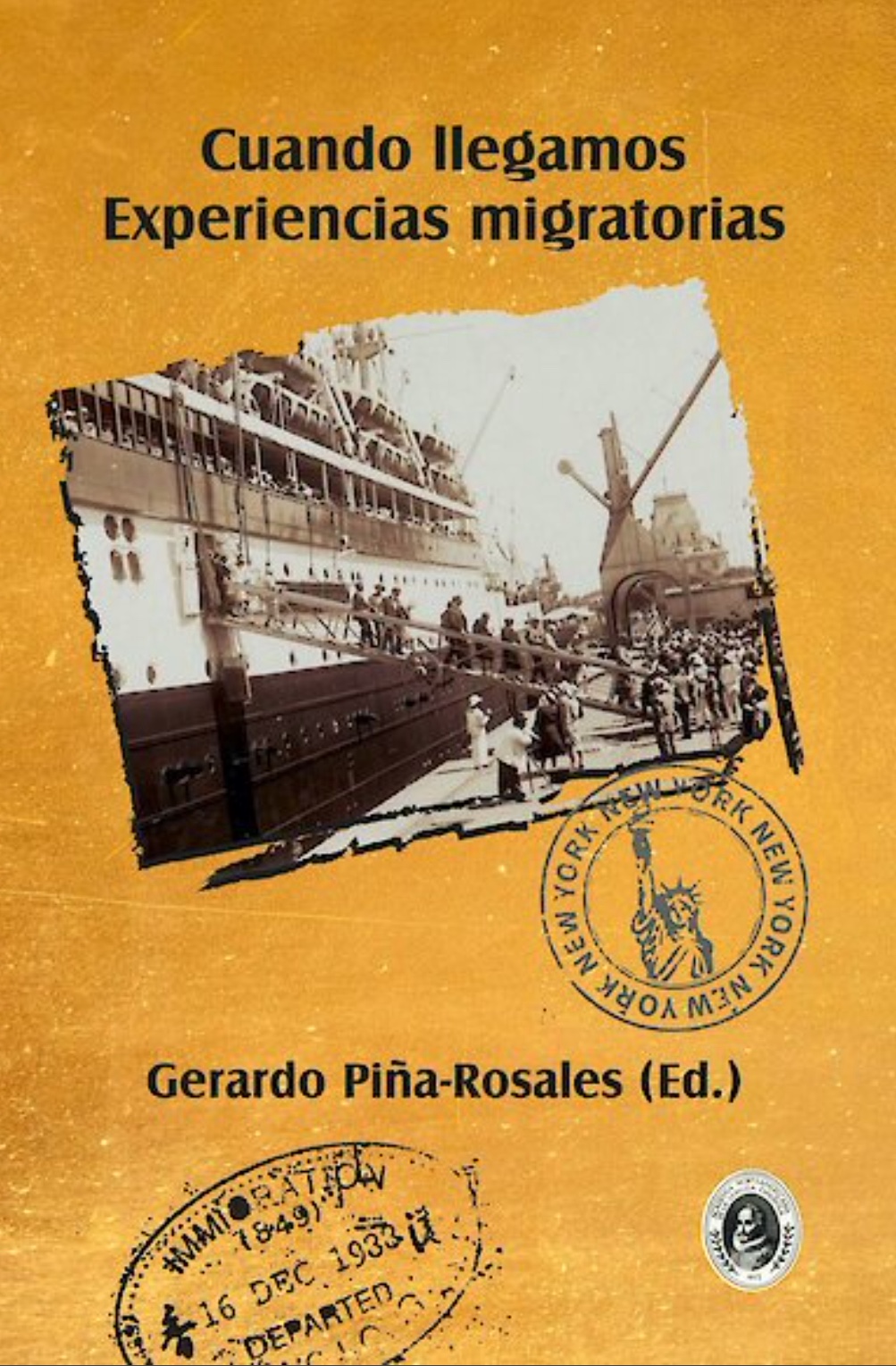 Cuando llegamos. Experiencias migratorias [When we arrived. Migrant experiences] is  a book of stories where 18 authors offer a testimony about their experiences at the time of their arrival to the United States as migrants. Gerardo Piña Rosales is the editor of the book.

Information about the authors:

He was born at The Line of the Conception (Cadiz, Spain) in 1948, and immigrated to Morocco in 1956. He pursued higher studies at the Spanish Institute of Tangier (Morocco), and at the University of Granada and the University of Salamanca (Spain). Later on, he continued his studies in New York (where he has resided since 1973). He graduated from Queens College of CUNY and he obtained his doctor’s degree at the Center for Graduated Studies of the same university with a thesis about the Spanish exile literature of 1939. Since 1981 he works as a professor of Literature at the City University of New York (CUNY). He is a Numbered Member of the North American Academy of the Spanish Language and he was his director from 2008 to 2018, Correspondent to the Spanish Royal Academy and currently Honorary Director of the same. He is also Correspondent of the Panamanian Academy of the Language and of the Hispanic American Royal Academy of Sciences, Arts and Letters, and Honorary President of the National Hispanic Society Sigma Delta Pi.

As much as he has devoted himself to literature, Piña Rosales has cultivated since his youth the photography. In his writings, the photos are not limited to become ancillary parts of the text but they pretend to be valid by themselves, in perpetual dialectic with the words. And this is precisely what he is trying to reach with his next novel, Voz que clama en el Estrecho, a fascinating story of love and hate narrated by him, polyphonically, between the territories of Spain and Morocco.

Professor, researcher and literary critic. He was born in the city of Los Angeles, California. He grew up between Mexico and the United States. He began his higher education at the University of California in Los Angeles (UCLA), an institution where he graduated with a Licenciature in Spanish Language and Hispanic Literatures. A few years later, he graduated with a doctor’s degree from the University of Columbia (New York).

Currently, he is a professor of Mexican and Hispanic American Literature at the University of the City of New York (CUNY), Lehman College Campus. He started his association with the North American Academy of the Spanish Language (ANLE) as a collaborator in 2005. Later on, he was incorporated as a Numerary Member in 2016 with a speech about Carlos Fuentes and the border. He is a member of the Board of Directors of ANLE and he is the actual information coordinator.

He has participated in multiple congresses, presentations and cultural events on behalf of the Academy. He is coeditor with Gerardo Piña-Rosales, Jorge I. Covarrubias and Joaquín Segura of the book of idiomatic advices Hablando bien se entiende la gente (ANLE/Santillana, 2010).

His articles and book reviews have been published in Revista Hispánica Moderna, Ventana Abierta and Revista Literaria Baquiana, in the Enciclopedia del Español en los Estados Unidos (Santillana) as well as in la Revista de la Academia Norteamericana de la Lengua Española (RANLE) and in the Boletín (ANLE), among other publications.

She was born in Santiago of Cuba and she has resided in the United States for several decades. She is a poet, narrator, playwright, essayist, editor, literary critic, translator, director of the Editorial Board of Baquiana Literary Magazine, Numerary Member of the North American Academy of the Spanish Language (ANLE), and Correspondent Member of the Spanish Royal Academy (RAE) and of the Venezuelan Academy of the Language (AVL). She has published more than twenty books in different literary genres. Her most recent books of poetry are: Rumores de Suburbios (2009) and Miami / poemas de la ciudad – poems of the city (2015). Of theater: Trilogía de Teatro Breve (2012) and Las Tocayas (2013). Of essays, notes and literary reviews: Crónicas Hispanounidenses (2014). Her work has been partially translated into several languages, as well as published in magazines and anthologies in Asia, Europe, Latin America, Middle East, and the USA. She has received some awards and acknowledgements in Chile and the United States. She participated in the writing of the first “Encyclopedia of the Spanish in the United States” (Yearbook of the Cervantes Institute) in Madrid, Spain (Santillana, 2008). The publishing house Holt, Rinehart & Winston included her poetry in the text books: Exprésate(2006- 2010) and Cultura y Lenguaje (2007-2010), used in the study of Spanish in middle and high schools throughout the United States. In the year 2010, she was selected among the most outstanding 100 Latinos of Miami for her work and contribution to the culture.